I get at least 2 nodular or cystic acne before my menstruation every time... and when I had spicy and junk food for more than a day and also when I have not removed my make up before going to bed…otherwise my skin is behaving little well these days.. Touch wood... this time as usual just before few days of a grand party I had a red bump exactly on the tip of my nose and cyst on my chin...eeyokess... ..

Initially I simply mixed 2-3 pinches of cinnamon powder and added a bit of honey exactly equals to cinnamon powder to make a paste...then I added 2-3 drops of lemon juice.

I left it over night... next morning redness was almost gone...and then I repeated the application at least 3 times a day... and my bumps were reduces to half by evening…

I had home made cinnamon powder from cinnamon sticks and an organic honey.
You can simply grind cinnamon in a grinder... it will be little gritty but will be really effective.

It will tingle in the start, may burn for a while, especially if honey is not good enough and lemon is more... so do add a proper amount of honey. You can also wash it after 20 minutes and it can be used as a face mask as well... It will make skin glow. Results will be a brighter clearer skin.

It acts as an inflammatory on the skin and increases blood circulation. It reduces acne and also helps in reducing acne scars.

Why honey: You know honey is actually my favorite ingredients when it comes to Diy...honey helps in healing inflammation on skin because it is a natural moisturizer, an anti bacterial and a humectants. Honey cleanses skin deeply

Lemon: is always good for acne scarring also act as a spot remover...it helps in reducing acne/bumps/cysts by killing bacteria.

Since it has lemon I wouldn't suggest to use it regularly .If you are using it as a spot treatment use it till the time you have acne and otherwise once or twice a week because lemon is photosensitive

Hope you like it!
Do leave your comments they just make my day.


Another L’Oreal lipstick and another pink... aww I am bored of my self... I don’t know how long I am going to be addicted to pinks... every time I see a new pink lipstick I think its little different and I don’t have one but as soon as I bought it I found it little similar to other pink shades…soon I am going to get good coral and nude shades…I promised this to myself..

I have already reviewed one of the pink shades from this range of L’Oreal... Today I am sharing my experience with L’OREAL COLOR RICHE  lipstick in shade -"461 BURGANDY RICHESS"...

"Dove"- for me dove is always something moisturizing. Actually i like dove products but i am not a huge fan of its products . Especially the one we get in our Indian market, since i have tried few from Canada. This one is also from the few products that my hubby got from Canada..We also get one facial foaming face wash in India  with the same name , but i think its different.This a cleanser to me rather than a face wash.


Packaging : Simple and sturdy packaging with easy to use flip flop cap.

Texture: Thick and creamy. It says its foaming but its not.It doesn't lather at all..When i apply this i feel i am applying a very light weight moisturizer on my face.It is thick but soft and gel cream like.

It spreads easily in to skin .. just like any cream cleanser .. but its not as creamy .. it feels to skin something like soft gel or balm cleanser.It take off all the dirt and make up very easily.
The best part is it leaves a lovely glow behind even after rinsing off face with water.
Never leaves skin dry nor oily/greasy.

I just love it for this reason , generally cream cleanser leaves a creamy greasy feeling behind but it doesn't. It does give soft skin  but not oily /greasy.

This will work for all skin type because it maintains moisture very nicely , even if i wash my face with foaming face wash after using this my skin never felt stretched or dry.

Since i am using it i can see lovely glow on my skin..

It can be used as a cleanser,make up remover or as a face wash.Though it doesn't lather but still removes all the dirt.

I couldn't see any con in it .. other than its availability for we Indians and why its called foaming cleanser  it doesn't lather..

Overall its was a great experience to use something like this. I have been missing this clear and glowing skin from long. I think my skin is really improving since i have started using some really good products like kiehls face wash and this cleanser.I wish i could find it somewhere in India or online.

Have you ever tried this cleanser from dove ? What are your favorite products from Dove ?

Grooming a kid is the biggest task...isn’t it...?? We all want our kids to learn things quickly and develop different skills. The most important aspect of development of an infant and a toddler is their ability to explore and toys play an important role in that exploration.

Once an infant become preschooler, their creativity will increase and they will learn from play school and with other kids but by the time we can give them better learning and explorations... as we know the first school of kid is at home and mother is the first teacher..

Today I am sharing five toys that can help develop creativity and intellectual skills of a toddler. These toys are very common and easily available but I never knew their importance.

Make Up Tricks For Slimmer Face 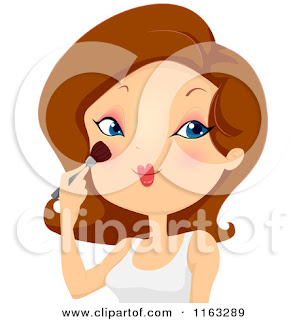 As we age our face doesn’t look as perfect as it did earlier... After pregnancy I could see few changes in my face...and I have tried few make up tricks to look better.

Here I am sharing few tricks that helped me to look prettier.

To camouflage a double chin: sweep brownish rose blush along jaw line from just below the ears to chin and blend. Highlight tip of the chin with white powder for slimmering effect…

My face is little long and oval kind... and I try to make it look little round and thinner. I have learned this trick from one of the make up artist at Lakme salon when I took a party make up there:

For making look nose little slimmer use contour powder : sweep it with sleek crease brush starting from the inner part of eyebrows , down to either sides of your nose, join the lines under the tip of nose. Now blend it well.

What are your favorite tricks to make your face look prettier?


On my last visit to Mumbai I really had a long list of Mac products but unfortunately I ran out of time after shopping like mad at Zara and I had few minutes to browse when I reached at the floor where there are all cosmetic brands at palladium, Kiehls was closest and I ended up buying few things from there only, like - kiehl’s corrector, kiehls under eye cream and this pretty blue cleanser.

It comes in a transparent bottle (my favorite packaging) with a flip flop cap. It has a strong plastic seal to prevent spillage.

Texture: It’s a blue gel. The consistency is runny. Very little quantity is required to clean whole face and neck, like about 4-5 drops are enough. In this way the bottle is going to last quite a long.


It‘s not a very foaming cleanser..In 4-5 drops it lathers a bit...I am actually used to foaming cleanser so it took me some time to adapt it and satisfy my self that my skin is cleaned. But as soon as I look in the mirror , I am all happy to see the clearer, matte and bright skin.

After cleansing my face with this in morning I could actually feel I can go out without make up. This never happened with me earlier.

When I wipe my face with toner cotton pad was clean, it means all the dirt and make up was perfectly removed...so I am satisfied.

I get pick kind acne all the time, pick acne that looks like big black head or you can call small Dane in Hindi...when I pick them they turn in to cystic ones...and every morning I do get white heads around the corner of nose and chin.

But with the regular use of this cleanser my white heads are actually disappeared completely and my heavy breakout are reduced...I don’t say it completely get rid of acne because there are so many other reasons for breakouts (external and internal)... but I can see instant reduction in the angry redness of my breakouts and gradually I have noticed a good change in my pick acne.

It controls shine in this humid weather for 3-4 hours , after 3-4 hours I had little shine on my t-zone but not as shiny or oily as compared to my last face wash(in this weather).But the best part is my skin didn’t lose its brightness even after getting this shine, it was still fair and bright. Otherwise with other face wash my skin loses its freshness and brightness as soon as it gets shiny/oily.

Every time I use it I get refreshing cooling sensation and minty or peppermint like fragrance. It controls my oil for long without making skin dry...

It’s too humid here in Bhopal because every time before rain it gets humid...and my other favorite face wash like Neutrogena and lakme are not able to do well... don’t know why...but I am happy I had this blue goddess...

It has some really nice ingredients:


These things help in reducing acne scarring as well...and camphor is something unique, I never knew it can be used for skin.

It is affordable because the bottle is easily going to last for 2 months or more.

Overall I have liked it since I got... its going to finish I am really sad it’s not available here. It’s highly recommended for oily and acne prone skin .It may work well for dry skin beauties as it’s not drying my skin even when I have used it twice at the same time. (actually I believe in double cleansing but I ended up my cleanser and was feeling lazy so I washed my face twice (silly me) with this face wash only ..And even then my skin was not feeling stretched).
I just loved it for keeping my skin bright and clear.

Which is your favorite cleanser??


Do leave your comments, they just make my day

I am not the one who pays heed to body cleansers, bathing soaps or body wash, until they are not doing something different. I couldn’t notice what’s there on my rack .. That I am using for bath…

So you got it.. This one did something different, lets figure out it was good or bad..
Read more »
Posted by Unknown at 17:31 16 comments:

I am a member of networked blogs